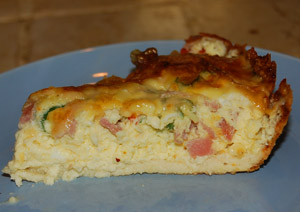 This low-carb quiche recipe includes crust made from almond flour. It tastes very close to the “real thing” and makes a great low-carb breakfast.
It also works well refrigerated and reheated in the microwave.
Total baking time can be up to 1.5 hours.
Total 4g net carbs per 100g
190 calories, 13g fat, 14g protein


Ingredients:
For the crust

Nutritional information:
In total, using the amounts above:

Variations:
There are obviously all sorts of possibilities on the filling – experiment with different cold meats, cheeses and vegetables. One word of caution though – do not include too many vegetables, as they add further moisture to the mix once it is baking, and so can make your quiche soggy (thanks to @LowCarbTiki for highlighting this for me – my initial attempt failed miserably due to there being too much veg!)