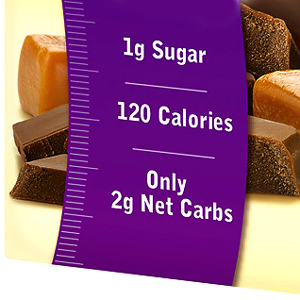 Are net carbs a myth? The term was first popularised by Dr Atkins.

Some carbohydrates, such as fibre, are not digested by our bodies. So it makes sense to exclude them from your daily carb count.

This distinction matters to those of us who follow ketogenic low-carb diets, like Atkins or Keto, with very low carb limits of around 20-30g a day.

But some people claim that net carbs is a bogus concept, made up by dishonest companies to peddle low-carb products. Can this be true?

Net carbs are real – but not all marketing claims are

The actual concept of net carbs is based on scientific fact. It is not misleading – in itself.

But it does get abused by some dishonest producers of low-carb products. They twist and obscure carb counts to create false or exaggerated low-carb claims.

Most countries have strict regulations about presenting standard nutritional data. But sadly, not so much when it comes to niche concepts like net carbs. So unscrupulous companies can get away with false claims in this area.

This bad practice is especially common when it comes to sugar substitutes, sweets and low-carb bars – casting doubts about the whole notion of net carbs.

Some products are indeed sugar-free and low-carb as they claim. But many are not. So we should be very careful with anything that’s marketed as a low-carb alternative to sugar and sugary treats.

What are non-digestible carbs

There are two types of non-digestible carbs – fibre and polyols (sugar alcohols).

Fibre is found naturally in most plant foods. It can also be isolated and refined to be used in processed foods. Fibre is not digestible. So you don’t have to count it towards your daily carb limit.

BUT there is a lot of confusion over regional differences in fibre labelling – more on that later.

2) Sugar alcohols (polyols): some are digestible, not all are zero-carb

Polyols are derived from natural substances but are heavily processed and refined.

The biggest misconception about polyols is that they are all zero-carb – this is not true.

The only sugar alcohol that is almost zero-carb is erythritol. Other ones (e.g. xylitol, sorbitol, maltitol, lactitol, mannitol) are at least partially digestible, although their absorption rate varies from person to person.

If your product only contains erythritol, you can subtract polyols from the total carbs count.

But if it contains polyols other than erythritol, then you cannot discount them completely. It is likely that at least some of their carb content will be absorbed and digested.

Calculating net carbs in natural plant foods is simple. You just need to subtract grams of fibre from total carbs, and you have your net carbs.

But beware of regional differences!

Regulations on how to present nutritional information are different in the USA. Labels show total figure for carbohydrates, including both digestible and non-digestible carbs. In Europe and Australia, labels show only digestible carbs, with fibre already excluded.

If your country is not listed above, check with your national authorities that are responsible for issuing nutritional guidelines in your country.

Net carbs get a bit more complicated when it comes to processed foods – yet one more reason to base your diet on real whole foods.

If you can, it is best to avoid packaged foods and sugar-free treats.

One good alternative is to make your own from scratch – then you know exactly what went in.

If you must buy a ready-made treat, stick to well-established reputable brands that have been tried and tested by other low-carb dieters.

If you buy products from new unknown brands, don’t immediately trust their claims about “net carbs”. As mentioned above, there are no specific strict regulations regarding this, so some manufacturers abuse the concept.

Check the ingredients carefully. Use the checklist below as a rough guide to watch out for net carbs abuse.

What is the main sweetener?

(Erythritol/Stevia combinations are getting very popular, as both the density and sweetness are very similar to sugar –  without any carbs). They also cost more. If you see these either of these sweeteners, the product is likely to be trustworthy – but may be more expensive.

Non-zero-carb sweeteners
All other polyols expect for erythritol (e.g. xylitol, sorbitol, maltitol, lactitol, mannitol) are partially digestible – so their carb counts cannot be assumed to be zero. If you see any of these ingredients, net carbs count might be higher than claimed.

Are there any fillers or hidden sugars?

Some products include fillers that are very high in carbs. Though they may be not technically sugars (not all carbs are sugars), they will affect your blood glucose and mess up your carb levels.

Maltodextrin is a very common and a very nasty one.

There may also be actual sugars hiding under fancy names – check out our guide to the many names of sugar.

Are there many artificial ingredients?

Any ingredient that you can’t recognise represents a potential risk.

The ingredients list on some products reads like a supplies list for a drugs lab. And it’s just not practical to research a dozen of obscure chemicals every time.

If a product is packed full of artificial ingredients and other nasties, it is not produced with your well-being in mind. Rather, it’s just there to make the most profit for its producer – at the expense of your health. Avoid!

Be careful – always check the labels

Overall, net carbs concept is not a myth. But it requires some caution, especially when dealing with processed foods.

Some products may be as good as they claim – but many are not. So stay vigilant and check all labels and claims before trying new products.