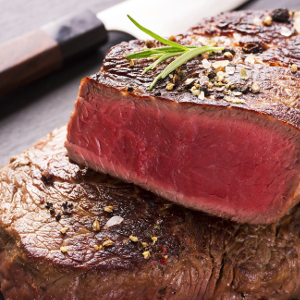 You already know about the benefits of a low-carb diet. Some of us are tempted to go even further.
Cutting down carbs to 20-30g a day makes you lose weight quickly and painlessly.
So, if you cut your carbs down to zero, it will be even better – right?

Not necessarily. Here’s why.

The only foods that are genuinely 100% zero-carb are fats and animal proteins.

Zero-carb limits your food choices to a ridiculous degree. You are left with red meat, fish, poultry, butter…  That’s about it!

Low-carb diets exclude foods like grains and fruit. This is sensible. The high sugar content of these foods negates their nutritional benefits.

What could you eat on a zero-carb diet?

Bacon for breakfast. Steak for lunch. Baked fish for dinner. No sides, no sauces.

Does this sound appetizing? How long do you think you would last?

It will get extremely boring quickly. Most likely, you will just give up after a few days.

20g of carbs a day are enough to add joy to your meals. Salads, cooked vegetables, cheese and cream jazz up your protein dishes. Berries, nuts, seeds and dairy make lovely low-carb desserts.

Zero-carb would not provide enough vitamins

Red meat and fish contain plenty of vitamins A, B and D. But they do not include all the vitamins and minerals you need.

For example, vitamin C comes from plant sources only. Contrary to the popular belief, it doesn’t have to be from fruit. There are plenty of low-carb sources of vitamin C – like bell peppers (yellow ones contain twice as much vitamin C as oranges), green leafy veggies, broccoli and strawberries.

If you spend your 20g a day wisely, you can get the full spectrum of micronutrients from low-carb foods.

Cutting your carbs down to zero will result in deficiencies. You would need supplements to support your diet. And supplements are never as good as fresh whole foods.

Zero-carb would not provide enough fibre

Vitamins and minerals are not the only area of concern. Fibre is another essential element that you would miss on zero-carb.

Our bodies do not digest fibre, but it is needed for trouble-free digestion. If you don’t get enough fibre, you are doomed to be constipated forever.

Fibre can only come from plant sources. If you are only eating meat and fats, you won’t get any with your food. So again, you would need to rely on supplements – not ideal. But there are plenty of low-carb foods that are high in fibre.

Even the Northern tribes eat some carbs

Advocates of zero-carb cite the example of Eskimo and Inuit tribes who live far up North in the land of permanent winter. Agriculture is impossible so they rely on hunting as their main source of food.

But once you read up on this, you realise they are not zero-carbing. Firstly, they consume every single bit of offal from their prey. Offal is very high in vitamins (those of us who are squeamish miss a trick).

During summer periods, the Eskimo travel to stock up on supplies like berries, edible plants and wild tubers. Their diet is very low-carb – but not zero-carb.

Is there any benefit in going zero-carb?

Your body could adapt to a zero-carb regime. You might lose fat at a slightly higher rate. But your chances of failure would also increase, due to lack of variety.

20g a day was originally devised by Dr Atkins as the lowest optimal level of carbs. This is now the consensus opinion amongst most low-carb diet experts. 20g is low enough to induce nutritional ketosis, but high enough to allow meals that are joyful, nutritious and healthy.

Having said all that, fans of zero-carb report some benefits that they couldn’t get on Keto. Read the case for zero carb here

Dukan is a low-carb, low-fat diet that includes zero-carb protein-only days. That’s a slightly different scenario. The diet is carefully calibrated to do zero-carb only for very short periods of time. It is also supported by oat bran for fibre and vitamins.

Some people get great results on Dukan. But in our opinion, a low-carb high-fat diet like Keto is healthier and easier.

Is there another way to speed up your low-carb diet?

If you really want to go hard core, add intermittent fasting to your low-carb diet.

It works best once you are fully Keto-adapted – so after you’ve been on Keto for at least one month or so. There are many ways to do intermittent fasting. When you are in ketosis, it’s fairly easy to do fasting – hunger doesn’t bother you.

Another obvious way to speed up your weight loss is to do more exercise. Again, it’s best to wait until you are fully Keto-adapted. Low-impact cardio like jogging is harder to do without the carbs – so emphasise strength training and interval cardio for optimal results.

Don’t make life harder for yourself! Get all the benefits of a low-carb diet without going to unnecessary extremes.

Having published the post above, I received quite a few comments from zero-carb fans, who are happy and thriving on this way of eating. Their community is much bigger than I realised – and I have learned something new from them.
Although no scientific studies have been conducted yet, there is anecdotal evidence that zero-carb can help to manage certain medical conditions. Some people also report better energy and mental clarity.
I stand by my original opinion that a generic Keto diet is optimal for most healthy people who diet for weight loss. However, I concede that a zero-carb diet can be beneficial in some cases.
Here’s a personal account from a radical carnivore L. Amber O’Hearn (@KetoCarnivore), explaining how she benefited from a zero-carb diet.

The benefits of a zero-carb diet

When I decided to try a meat only, “zero carb” diet, I fully admit my only motivation was weight loss. Somehow, even though a very low carb diet had completely normalised my weight in my twenties and I had stuck with it for over a decade, I was unable to lose my pregnancy gains, and I was even, slowly, but surely, gaining.
At 5’6, I had found myself weighing nearly 200 lbs, even though I was consistent with my diet, at about 20-30 g of carbohydrate a day. After hearing about some ZC successes in cases similar to mine, I decided I was going to give it a try, just as a temporary measure.
I was astonished to find that this made an enormous difference for me. I immediately began losing my excess weight, losing a pound every other day the first few weeks. But if this had been the only benefit, I would have returned to a regular low carb diet as soon as the weight was gone.
The amazing and unexpected benefit for me was a swift and complete resolution of my Type 2 Bipolar disorder symptoms. I had been suffering from this mood disorder for over a decade, and it was rapidly progressing in seriousness. This carnivorous diet gave me my life back, and it has stayed in remission without medication for 8 years now.
I’m not the only one who found extraordinary benefits. In the various groups I’ve participated with over the years, remission of certain types of poorly understood disease are common. In particular, autoimmune diseases like asthma and arthritis, and digestive disorders like Crohn’s and IBS often respond.
Even in those who don’t have a health issue, it is not uncommon for people to say that the difference in the way they feel in terms of energy and mental clarity between going from a low carb diet to a carnivorous diet was as qualitatively different for them as going from a SAD to a low carb diet. Not everyone experiences this, but enough people do that it seems worth an experiment!
Because this dietary change had such a critical impact on my life, I became concerned with what the long-term problems with such a diet might be. I was very surprised to discover that none of my concerns held up to scientific scrutiny.
As an example, it turns out that animal sourced foods provide complete nutrition. Many are thriving eating only muscle meat, but if you are willing to eat the occasional egg, liver, and both broth, you can exceed the RDAs for most nutrients of concern as a safeguard.
Vitamin C is particularly confusing, because the USDA database reports meat as having none, which is not accurate. In fact, it was common knowledge not too long ago that fresh meat cures scurvy! I’ve written a post about that here.
I gave a talk this summer at KetoFest about why I eat this way, and some things I’ve learned since then. You can watch the video on YouTube
– L. Amber O’Hearn

Do you have a different point of view about zero-carb?

This post has turned into an interesting discussion.
Do you have a different opinion – or anything to add? Please share in the comments below!