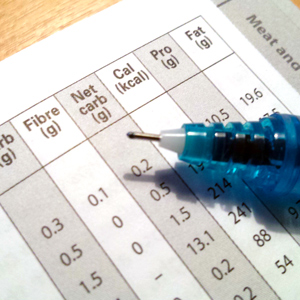 Are you diligent about counting your carbs? Every gram matters when you are aiming for a very low daily intake.
You are probably already careful about checking food labels, weighing your food, and keeping a food diary.
But even if you track all your food, your carb counting might be incorrect. Inaccurate calculations can push you well above your recommended daily limit.
These common mistakes can distort your figures and derail your progress. But they are easy to avoid – as long as you are aware of them.

Let’s start with a quick recap of the basics.
Not all carbohydrates are created equal. Some of them – mostly fibre and sugar alcohols (polyols) – are not digestible.
When you eat these foods, you are technically consuming carbs. But they don’t get absorbed by your body. There is no effect on your blood glucose or calorie intake.
For low-carb diet purposes, we only count the carbs that are digestible. They are referred to as net carbs.
Checking information about total carbs is easy. You can find it on food labels, diet tracking apps and online food databases.
Problems usually arise when people start to calculate net carbs.

Different countries have different rules on food labelling – especially when it comes to carbohydrates and fibre.  When we access recipes and food data online, we might be unaware of these differences.
In USA, food packaging and food databases show the total count of carbohydrates for each food. Fibre count is included separately. So you can calculate the number of net carbs as follows:

Most authors of low-carb diet books and blogs are American. So you have probably come across this formula, even if you are not American.
But this formula does NOT work in Europe, Australia and Oceania.
In those parts of the world, food labelling regulations are different. The total carbohydrates number on packaging shows digestible carbs only. The fibre count has already been excluded.
If you subtract the fibre again from the carbs figure, you will end up with an incorrect net carbs count. It will be lower than the real one.
If you are based in USA, and use a recipe from a UK-based website or book, you might fall into the same trap.
For example, let’s look at nutritional data for almonds.

For the US figures, you could apply the formula to calculate net carbs correctly:
21.5g (total carbs) -12.5g (fibre) = 9g (net carbs)
But the UK figure already shows 9g of carbs – this is the net carbs figure, with carbs count already subtracted. If you try to subtract the fibre again, you will end up with a negative number of net carbs – which is clearly incorrect.

These regional variances in food labelling create a problem for popular food tracking apps like MyFitnessPal. The app is global, so their food database includes mixture of entries from all over the world.
You have no way of knowing the origin of these entries. So if you use a mixture of US and European data in MyFitnessPal, you are likely to end up with inaccurate carb counts.
Another point to watch out for is user-submitted entries.
Most food databases use the core data from government bodies, food manufacturers and supermarkets. This type of data is usually accurate.
But they also allow users to submit their own foods and recipes. Quite often, this data is not verified for accuracy. Some people don’t bother entering all of the fields accurately. If they are only counting calories, they might not bother entering data for carbs or fibre at all. Or they might be simply careless.
So be aware that some net carbs data in tracking apps might be inaccurate.
The best way to avoid this issue is to use an app that was developed for low-carb dieters like CarbManager, Atkins Carb Counter (US only), KetoDietApp (UK).
FatSecret segregate their app and tool versions by region, which is a more sensible approach.

Another common mistake is discounting all carbs in polyols (sugar alcohols).
Polyols (sugar alcohols) are a sugar substitute, often used in sugar-free sweets. Our bodies cannot process polyols fully, so some of the carbs they contain are not digestible.
People often assume that carbs in all sugar polyols are the same as fibre – not digestible at all. So they subtract the number of carbs in polyols from the total figure, like they do with fibre.
But not all polyols are the same!
Each type has a different carb count: some are very low in net carbs, and some are quite high. They also have different glycemic index.
Common polyols are:

The only one that’s almost completely indigestible is erythritol – its calories and carb count is close to zero.
All other polyols include a portion of digestible carbs, so you can’t just discount them completely.
The best way to check is by looking at the calories information. Calories in a sweetener product can only come from carbohydrates. So if the calories count is not zero, then there must be some digestible carbs involved.
For example:


Truvia Zero Calorie Sweetener is a made from erythritol and Stevia extract. It has 99 total carbs, but none of them are digestible, so the calories count is zero.
TotalSweet sweetener is made from pure xylitol. It has 100 carbs, about 60% of which are digestible. So it has 240 calories and 60g net carbs.
Read more about polyols digestion

Avoid these three mistakes to make sure your carb counts are accurate. 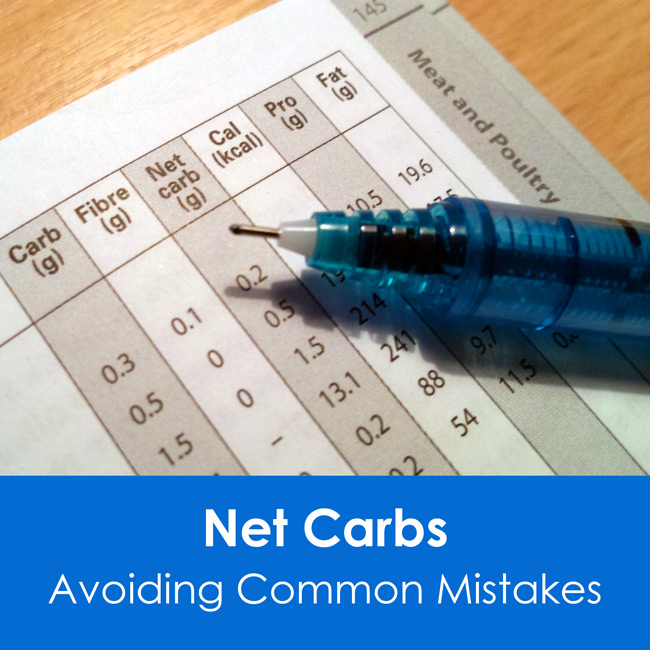