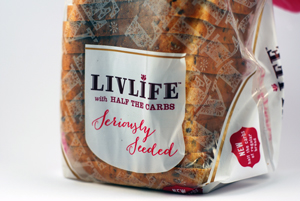 Livlife low-carb bread hit the shelves of Waitrose stores across the UK in 2013 (not currently available outside of the UK).
Backed by a major advertising campaign with the strapline “Bread is back”, it has generated a lot of publicity.
I bake low-carb bread myself all the time, so I was intrigued. I know it can be hard to get it right when baking at home, let alone to create a commercial product on this scale.

So can Livlife bread be as good as all the hype promised? I had to investigate.

So although its carb content is lower, this product is just as full of processed stuff and additives as conventional sliced bread. If you are following Paleo/Primal eating plan, or just simply trying to eat clean, it is definitely not for you.
To be fair to Livlife though, they made no claims with regards to being natural or chemical-free. It’s certainly not any worse in this respect than any other sliced bread on a supermarket shelf.

Information as provided on the packaging and on the Livlife website.
This carb content is indeed much better than regular sliced bread, which is usually around 40-50g carbs per 100g.
This is the main selling point for Livlife bread. I must admit that they definitely got it. If you are going to be in Waitrose or any other supermarket looking for low-carb bread, this would definitely be the one with the lowest carb content.
However – if you were to take the time to make your own low-carb bread at home, most recipes based on almond or coconut flour usually deliver lower carb content than this. My bread recipes typically contain around 1-2g net carbs per slice, compared with 3.8g net carbs in a slice of Livlife bread.

How does Livlife bread taste? 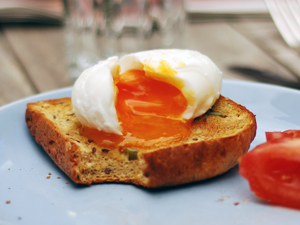 Having got my loaf from Ocado this morning, we had some for breakfast. I tasted the bread on its own, toasted, and buttered with a boiled egg.
It actually tastes quite nice! I would say pretty much as well as any other full-carb seeded wholemeal bread. The texture is dense but supple, and it toasts nicely.
This is perhaps not surprising, as the bread does contains a lot of wheat and gluten. Their absence is what makes taste/texture a bit of a challenge in gluten-free baking.
So overall, full marks to Livlife on the score of taste.

As this bread contains wheat and soya, this makes it off limits for most specific low-carb plans.

Processed grains are not allowed until the final maintenance stage of the diet. Even then, they are not recommended due to their effect on insulin (based on the original and the updated books rather than on Atkins Nutritional products).

Dukan Diet is always mentioned in the press whenever they write about low-carb, because it gives them an excuse to illustrate with photos of the Duchess of Cambridge, who was allegedly a follower.  I don’t blame them for wanting to print more photos of her, but they are definitely missing the point here. This bread would not be suitable for Dukan until the very final stage. While wholegrain bread is allowed during the ongoing maintenance, Dr Dukan would probably prefer you to have standard wholemeal bread, which is lower in fat than Livlife.

At 14g net carbs per 100g and based on wheat flour, Livlife bread would be difficult to incorporate into ketogenic diets.

Definitely not – the bread is based on wheat flour, and pretty much all other ingredients (except for seeds) are heavily processed.

Livlife bread is produced by Nicholas & Harris, a Salisbury-based bakery focusing on specialty pre-packed breads, rolls and buns. Nicholas & Harris are part of Finsbury Food Group, a major food corporation with millions of pounds in annual bread sales. So definitely a big industrial player, with enough cash to invest in a nation-wide advertising and PR campaign for their new product. 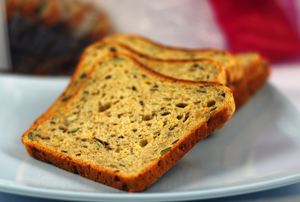 Livlife is definitely lower in carbs than conventional supermarket breads. If you are simply trying to reduce carbs, then it is a great option.
However, this product is too high in carbs and heavily processed ingredients for most popular low-carb diets such as Atkins.
If you are serious about eating low-carb, you would be much better off either avoiding bread altogether. Alternatively, bake your own bread at home from nut-based flours and seeds. It is actually quite easy, and there are plenty of recipes out there.
You can find some recipes on this website: almond flour bread, coconut flour bread.
There are hundreds of other recipes out there for breads that are gluten-free, free of chemicals and lower in carbs than Livlife. Check out my collection of low-carb bread recipes on Pinterest.

Livlife bread is a good start!

Having said all that, I think that it is overall a positive development that a major supermarket like Waitrose is aware enough of the low-carb trend to start stocking low-carb products.
Livlife is definitely a better choice than standard bread. If people start buying Livlife instead of their normal white or brown sliced bread, then they would end up lowering their overall carbs intake.
Finally, I am grateful to Livlife for all the publicity they generated. Low-carb dieting is being discussed in the press as a viable dietary choice. While their product may not be perfect, it is the first genuinely mass-produced mainstream one, so let’s hope that there will be more to follow.

What do you think?

Have you tried it? Do you agree with what the points I raised?
Please post your comments below and let’s discuss!