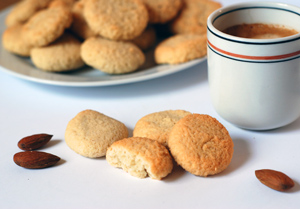 Amaretto biscuit is the laid-back, unpretentious Italian cousin of the French macaron.

Both are made with ground almonds and egg whites, but amaretto’s texture is infinitely easier to achieve – especially when baking without sugar, which is of course what we will be doing.

Ground almonds (also called almond flour) are a staple of low-carb baking, so this recipe is an obvious one to adapt. Amaretti should be crunchy on the outside and soft on the inside. They make a very satisfying low-carb dessert.

Almond flour on its own doesn’t actually taste of almond – I think this is one of the reasons why it is so popular. However, this recipe specifically calls for almond flavour, so we will need to add that in using almond extract, flavouring or liqueur.

You have probably heard of Amaretto Disaronno liqueur (which is traditionally also used for in this biscuits recipe). Both the drink and the biscuits come from Saronno town in Lombardy, Italy.

The legend goes that the recipe was invented by a young couple in Saronno, who wanted to give a gift to a visiting cardinal, but were too poor to buy anything. So they came up with this biscuits recipe which used simple local ingredients. Apparently the cardinal loved the biscuits so the recipe became famous as a result.

So will we be using Amaretto liqueur today?

Amaretto Disaronno is a wonderful dessert drink, but unfortunately, it does include some added burnt sugar. It is possible to use almond extract instead, which is what I recommend if you are on a strict low-carb diet.

However, only 1 tbsp of the liqueur would be required, so if you do happen to have a bottle of Amaretto in the house, do use that and add 2g of carbs to the overall net carbs count provided below.

The extra carbs amount per 1 biscuit would be negligible.

Beating the eggs to firm peaks

If you are an experienced baker, this will be very easy. If you are a baking beginner and haven’t tried this technique before, it is worth spending five minutes to do some research and find out how to do it properly. There are plenty of articles and videos on YouTube which explain the process. It is actually easy – but only when you know how.

My top tips are to use eggs at room temperature and to ensure that the bowl and the whisk are completely clean and free of oil. You can also try adding a tiny pinch of salt or cream of tartar. 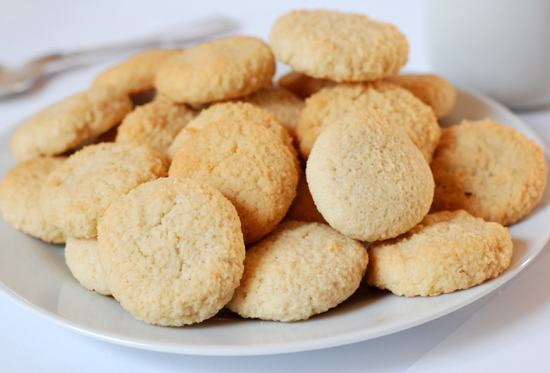 Low-carb version of classic Italian biscuits, made with ground almonds and egg whites

Cookbooks for low-carb baking and desserts

Do you need more low-carb baking and dessert recipes?
Check out these great cookbooks: