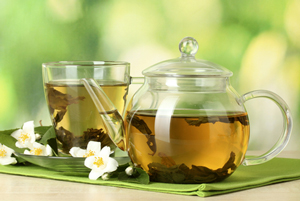 Green tea has a solid reputation as a healthy drink.
Unlike some products that are misrepresented as beneficial (sugar-loaded fruit juices, anyone?), green tea actually deserves its super-food label.
Numerous scientific studies back up health claims connected with green tea.
Some of these benefits are useful to anyone following a low-carb diet, such as Atkins, Dukan, Paleo or Keto.

How can green tea benefit a low-carb diet?

Studies show that green tea inhibits the digestion of starchy foods, suppressing the subsequent spike in blood glucose.
Anything that can naturally help us to digest less carbs can only be a good thing! [i] [ii]

Green tea can assist fat burning – alongside diet and exercise.
It is not a miraculous magic compound to help you shed pounds while sitting on a sofa (nothing works that way!). But if you are already dieting and exercising, green tea can help to speed up the fat burning process. [iii] [iv]

Green tea contains less caffeine than coffee.  A cup of green tea has about half the caffeine than a cup of black tea.
It provides a gentle energising effect, that won’t leave in you in a slump later.

Regular consumption of green tea can result in feeling satiated longer after meals.
This is obviously a huge benefit to anyone looking to lose weight, whether on a low-carb diet or not. [vii]

The best way to take green tea is to drink it!

Get some teabags or loose leaf tea, and start getting those catechins.
The only advice I would offer is to get a high-quality tea from a specialist merchant – it will be more expensive, but you will get a lot more pleasure of it.
I buy Jade Sword green tea bags from Jing – at 30p a teabag, they are a lot more expensive than supermarket teas – but they taste oh so much better. Plus it is still cheaper than one would pay for a soda or a bottle of water.

Matcha is a green tea powder popular in Japan.
It has a much higher concentration of catechins than regular tea – although the taste is perhaps less suited to a Western palate.
Traditional way of making matcha is to whisk it into a frothy hot drink in a round ceramic bowl.
If the idea of a tea ceremony does not excite you, you can also sprinkle matcha on foods, or add it to desserts, cakes and ice creams.

You can also take it as a supplement

If you don’t like the taste (or the price) of drinking green tea, you can opt for a cheaper and easier alternative by taking a green tea supplement.
The key beneficial extract normally used for supplements is epigallocatechin-3-gallate (EGCG). You can either get it on its own as an isolated supplement, or as part of a compound supplement with other vitamins and nutrients.

Nutri-Align multivitamin formula for low-carb diets contains 120mg of green tea extract (as EGCG), in addition to the full range of vitamins and minerals designed to support low-carb weight loss.