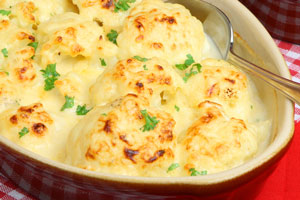 Most Western meals tend to come with a starchy side dish such as fries, rice or pasta. Finding suitable low-carb alternatives can be a challenge.
This post is about cauliflower – the best way to help you get over potatoes!
I included five classical recipes for low-carb main meals and side dishes using cauliflower.

Why every low-carb dieter should embrace cauliflower

Cauliflower is low in carb – about 5g net carbs per 100g – but you would never guess that.
It tastes “carbohydrate-y” and so works really well as a low-carb alternative in recipes that call for potatoes or rice.
It is suitable for most low-carb diet plans: for example, it is fine on Atkins (from Induction onwards), Dukan (from Cruise onwards), South Beach and Paleo.
It is a great source of fibre, vitamins (especially vitamins C, K and B6) and antioxidants.

One classic low-carb recipe substitution is to use mashed cauliflower instead of mashed potatoes. This works well on its own and as part of other recipes such as shepherd’s pie.
Recipe: Cut a head of cauliflower into chunks, steam or boil them. Once soft, squeeze out excess moisture using a colander or a sieve. Mash your cauliflower using a blender or a potato masher. Dress it up by adding butter, grated cheese, salt and pepper to taste. This usually comes out tasting much better than mashed potatoes!
Read this post for more tips on perfect cauliflower mash

This is similar to the above, but you will need to grind cauliflower first, and cook it second.
Recipe: Grate cauliflower using a food processor or a cheese grater, until it is in small bits about the size of rice grains. Heat a little bit of oil in a frying pan and gently fry your cauliflower bits for about 4-5 minutes. Season with salt and pepper.

Cauliflower cheese is of course a real classic. The only high-carb bit in the traditional recipe is flour that is used in the sauce.  You can use other ingredients to thicken the sauce instead – for example, egg yolks, cream cheese or almond flour.  I tend to use Atkins Baking Mix or Atkins Bread Mix. They are much lower in carbs than traditional flours and you only need a little bit for the sauce.

Recipe: Steam or boil cauliflower chunks until tender. Melt 60g (2oz) of butter in a pan, add 30g of Atkins Baking Mix and stir well. Slowly add 1/2 pint of full fat milk, stirring continuously. Simmer for about 5-10 minutes and add 60g (2oz) of grated cheese. Place cauliflower chunks into an oven-proof dish and pour sauce all over them. Sprinkle some more grated cheese on top. Bake for 20-30 minutes in a hot oven (390F/200C/Gas 7) until golden.

Baked cauliflower can help to bridge the gap left by the absence of potato fries (well, almost).
Recipe: Break up the cauliflower into small florets, slice up the steam into thin slices. Mix several tablespoons of oil with salt, pepper and any spices you like. Dip each bit of cauliflower into the oil mix, ensure it is coated really well. Place cauliflower chunks onto a baking tray and bake for about 60-90 minutes in a hot oven (hot oven (390F/200C/Gas 7) until soft and brown.

Cauliflower works well in soups, both where it is the key ingredient and as a substitute for potatoes.
Recipe: Cut up a medium head of cauliflower into small chunks. Boil in two pints of chicken or meat stock. Add 100ml (3oz) of cream, salt and pepper. Cool and blitz together in a blender. Jazz it up by adding chunks or grilled bacon and grated cheddar.
Cauliflower and cheddar low-carb soup recipe