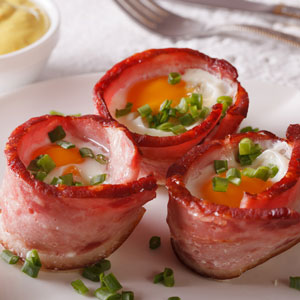 Traditional breakfasts are carb-fests: cereal, toasted bread, pastries, pancakes… So low-carb breakfast is more of a challenge than other meals.
This mega round-up of the best low-carb breakfast recipes from around the web is all you need.
So that you are never out of ideas first thing in the morning.
The recipes are sorted into several groups: baked goodies, clever egg dishes, pancakes and fritters, mock granola and muesli, meaty treats, and no-cooking required options.

Baked treats are a staple of traditional high-carb breakfasts. The good news is that we can convert most of them into low-carb versions. The main substitutions we need to make are swapping wheat flour for a low-carb option – like almond flour

– and using sweeteners instead of sugar.

Do you love the smell of cinnamon? Low-carb cinnamon buns are a real thing.
Cinnabons | 7g net carbs | via Maria Mind Body Health

If you have a waffle maker

We can bake just about everything else the low-carb way, so why not try donuts? You will need a donut pan.
Keto Pancake Donuts | 0.7g net carbs | via Ruled.Me
Cinnamon Donuts  | 3.2g net carbs | via All Day I Dream About Food

Eggs truly are a superfood.
Low in carbs, high in protein and fat, and packed with vitamins and minerals. Also cheap and simple to cook.
Dozens of variations to choose from: boiled eggs, fried eggs, poached eggs, baked eggs, scrambled eggs, omelettes…
But if you are bored with the obvious egg dishes, try something more complex and exciting.

Frittata is an Italian eggs-based dish. It is similar to an omelette, but is denser and usually finished in the oven.
Cheesy Chicken Pepper Broccoli Frittata | est. 5g net carbs | via Well Plated
Ham, Cheese & Mushroom Frittata | 1g net carbs | via I Breathe I Am Hungry

Mini-omelettes evolved from traditional omelette to make a perfect portable snack. Basically, just make a mix of veggies, meats and eggs as you would for an omelette, and bake in muffin tins.
Cheesy Mini-Omelettes | 2g net carbs | via Low Carb Support

Shakshuka is a spicy Tunisian dish made of eggs, tomatoes and onions. Great if you want something really different for breakfast!
Shakshuka with Chorizo | est 6g net carbs | via From James to Jamie

Moving on to pan-fried breakfast dishes. Similar to traditional recipes – except for the flour.

Traditional hash browns are fried grated potatoes. They go so well with eggs and other breakfast things. Potatoes are off limits, but we can make a low-carb version using cauliflower, celeriac or other lower-carb root vegetables.
Cauliflower Hash Browns | 3g net carbs | via Baking Outside the Box
Celeriac Hash Browns | est. 5g net carbs | via Greatist

Make your own low-carb granola from a mixture of nuts, seeds and sweetener. Once made, you can store it just like traditional granola. It only takes a minute to mix it with milk, so a super-fast breakfast after you’ve done your cooking in advance.
Low-Carb Granola with Cacao Nibs | 4g net carbs | via All Day I Dream About Food
Crockpot Low-Carb Granola | 5g net carbs | via Sugar-Free Mom

Another variation of mock granola is granola bars (aka muesli bars). Nuts, seeds, sweetener and some egg whites to hold it altogether. Make a batch in advance and they will last for weeks.
Low-carb Breakfast Granola Bars | 2g net carbs | via Low Carb Support

Full-fat yoghurt is reasonably low in carbs – about 3-4g carbs per 100g.
Mix 200g of yoghurt it berries, nuts and sweetener to make a lovely quick breakfast, with about 8-10g net carbs.

In this section, we have some obvious favourites like bacon and sausages. Here are some ways to jazz them up a bit.

Bacon, lettuce and tomato were meant to be together. And they don’t need any bread to keep them company!
BLT lettuce Wrap | est. 2g net carbs | via Jackie’s Happy Plate

Cold meats can pretend to be a tortilla wrap. So think of a nice spreadable filling, spread it on a slice of cold meat and roll it up. Cream cheese is a popular option, as it helps to hold the whole structure together.
Cream Cheese Ham Rolls | 2g net carbs | via Atkins.com

Are you tired after reading all those recipes?
Sometimes you just need a simple option. Here are some ideas for quick meals that don’t require cooking.

Sliced cold meats are perfect for low-carb breakfast. Opt for whole smoked meats, rather than ground and processed varieties. Smoked or cooked ham, salt beef, roast chicken or turkey slices are all good options.
Continental Europe is a great source of exciting cold meats – Parma ham, breosola, chorizo, salami, prosciutto, jamon… They really do know how to do this.
Add some hard cheese slices, plus perhaps tomatoes, cucumbers and olives for a perfect breakfast platter.

Smoked salmon and mackerel are full of healthy omega oils. Add some cream cheese or another soft cheese to complement the fish, plus some sliced veggies.

28. Protein shake or a smoothie

If you are not a breakfast person, get your nutrients from a protein shake or a low-carb smoothie. Use dairy or nut milk as base, add sugar-free protein powder.
Isopure

, both ready-made and powdered.
Jazz it up with berries or Atkins Advantage

Continuing with ready-made options, you can buy ready-made low-carb nut and seeds based cereal

, and use it instead of standard cereal.

So, this concludes my round-up of low-carb breakfast recipes.
Do you have a recipe to share that’s not been mentioned on the list? Please share in the comments.

Do you need even more low-carb breakfast recipes?

Check out these great low-carb cookbooks: